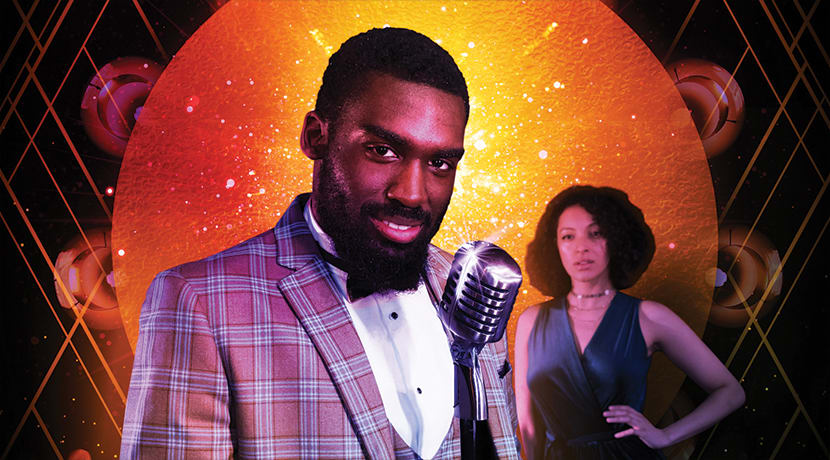 Club 2B is an intriguing piece of immersive theatre that tackles famous stories of love and revenge throughout the ages - all with an Ancient Greek twist. Presenting a fusion of a 1930s Berlin cabaret club, a Secret Cinema event and an underground prohibition-era nightclub, it’s an exclusive event for theatre-lovers, the adventurous and party animals alike.

Eat, drink and party alongside Zeus, the Greek King of all Gods and men (disguised as charismatic club owner ‘Z’), his jealous wife Hera and their reincarnations as iconic figures we all know and love.

“We focus on Zeus and Hera’s quite dangerous love for one another,” explains the event’s director, Corey Campbell. “Zeus is very unfaithful and Hera is very jealous, continually taking her anger out on women he’s been unfaithful with. What Club 2B suggests is that Zeus and Hera come back as all kinds of different characters we recognise, such as Marilyn Monroe and Jay Gatsby. We definitely address the themes of reconciliation, revenge, adultery and the male-written female narrative. Throughout history men have written for women. For example, Lady Godiva was depicted just as a woman who rode a horse naked, rather than the powerful land-owning woman she really was. So what we do with the script is suggest that Zeus had his part to play in twisting her narrative - and the same with figures like Marilyn Monroe. We take Zeus and Hera’s relationship right the way through the ages to 2019, where Hera meets Zeus at this nightclub and demands her revenge on him for his treatment of her.”

So what can audiences expect from Club 2B?

“They can expect a lot of dancing, live music, singing, acting - this is an interdisciplinary performance. We’ll have magicians, photo booths...there’ll also be some special guests on different days. You’ll get the same high-quality main performance, where you sit in cabaret seating and engage with the show, but each fully immersive, improvised after-party will be slightly different. I think being able to leave the theatre thinking, ‘Wow, I had a great dance and a good laugh’ is amazing. I know that this show will leave people surprised and saying they didn’t know theatre could be like this - so exciting, so innovative. Audiences are so passive in the theatre sometimes, and Club 2B is all about getting involved. I’m expecting people to want photos with Zeus and to get up and dance with him. We’re definitely breaking convention - especially because there’ll be a bar where you can get drinks within the theatre piece itself. Getting a drink is part of the show, and Z is going to give you the opportunity to do that throughout the night. This is an experience like no other…”

And what involvement will the audience have in the storytelling?

“Anyone coming to see Club 2B will have to be ready to become fully involved and throw themselves into the whole experience. We obviously don’t expect you to do anything in particular or get up and perform, but we may refer to audience members as specific individuals within the story. Those immersive moments are embedded into the script, and that character will be represented by a different person each day. That’s what’s so exciting about this show - every single performance will be unique. Then, at each after-event, you can fully place yourself in the world we’ve created and can continue to enjoy the characters you’ve seen and made. I would encourage audiences to come as characters they’ve created - whether that be their own creation or someone from their favourite book or film - and fully get into our nightclub experience.”

Club 2B offers a fusion of eras not only in terms of its characters but also its music.

“In the show itself we have near enough all genres of music. We have lyrics coming from very recognisable songs in popular culture, but put over a very 1930s composition. Then we’ve also done the same thing in reverse, where we have poetry that dates back to the 1950s put into contemporary rap by our musical director. Then, after the show, we’re just free-styling. Our band are ready for requests and even karaoke-type singing. As our band takes a break and the night fades, a DJ takes over, and that will more than likely focus on popular culture. But within the show itself, the genre really varies, and I’d say the only thing we don’t cover is Heavy Metal. We’re focusing on the eras the story comes from - so the Ancient Greek era will have folk music, the 1930s will be Gatsby’s era, the 1950s will have a heavy jazz sound - right the way through to the 2019 contemporary space, where we can really experiment.”

Corey feels that Christmas through to New Year’s Eve is the perfect time of year for an  immersive theatre piece: “Around the festive period we have a lot of pantomimes, which are really a phenomenal British art form of their own, but I felt like Coventry needed and deserved something that could bring a diverse group of people together from different cultures, backgrounds and religions. I find that immersive theatre, where you allow yourself to be embedded into the narrative of the very performance you’ve gone to see, is a really binding experience. There’s no better time for something of that nature than the Christmas period.

The opportunity to bring a piece like Club 2B into the Belgrade Theatre in this period is all about reconciliation of love. Coventry has reconciled the masses, especially through music, since way back when - think of The Specials, and even before that with its nightclub scene. That’s a legacy of Coventry that I want to continue.”

Corey certainly boasts impressive credentials, as both a performer and a creative. As well as being artistic director of Strictly Arts Theatre Company, who were behind critically acclaimed Edinburgh Fringe sell-out show Freeman, he was also associate & movement director for the recent UK tour of Noughts And Crosses - an adaptation of Malorie Blackman’s groundbreaking Young Adult novel.

“I was supposed to be stepping back from performing for a little while because I’ve headed up all of our shows at Strictly Arts and really led from the stage. But when I spoke to my team, they said it’d be a real shame if I didn’t perform in this one too. So I’ll definitely be making an appearance, along with some of my colleagues from Freeman. It’s really exciting because I was going to really miss performing. I was trying not to tell you because it’s meant to be a secret, but you’ve really pulled it out of me - I will be taking on the role of Zeus in Club 2B.”

So how did the show come about?

“People would always contact me to ask me to bring my energy to their events, in the hope that it would increase their footfall. So what we started to do at Strictly Arts wasn’t necessarily an immersive theatre experience but a clubbing experience. We would have little shows in nightclubs. For example, we had a Peaky Blinders room in a club in Birmingham. They had a secret door in this nightclub via a bookcase, which led to this little smoking area. So Strictly Arts used to occupy that area as Peaky Blinders or all sorts of other themes each week. People started to hear about this club that had a little show in it and it got really popular, so we started to move around to other cities like Manchester. I thought how amazing it would be if we could establish that same feeling, energy and vibe in an actual theatre. Then along came the opportunity to do Club 2B at the Belgrade.”

Given his reputation for theatrical innovation, it’s no surprise that Corey will also be co-artistic director of the Belgrade programme for Coventry’s year as City of Culture in 2021.

“Strictly Arts is a multi-disciplinary arts company telling the Afro-Caribbean story, which is something that I’m very, very passionate about. That’s obviously something I’ll take forward to the Belgrade, but I’ll also be looking at the stories of other marginalised communities. The Belgrade Theatre should be a home and a hub, where any community can come to express themselves - be it from the stage or as an audience member in dialogue with a performance. I intend to plough that vision right the way through the 2021 City of Culture programme. As an Afro-Caribbean man myself, my attention does tend to lie there, but diversity on the whole should be of the utmost importance in theatre - and not just when it comes to race, but a whole manner of things, from age and economic background to religion. The next shows that I have in mind will be new for Strictly Arts. Even Club 2B is quite new for our style, but we’re really going to start taking more risks. I would really love for Coventry to be behind me as we embark on this journey.” Club 2B is the place to be.”

Club 2B shows at the Belgrade Theatre, Coventry, from Wednesday 11 to Tuesday 31 December.