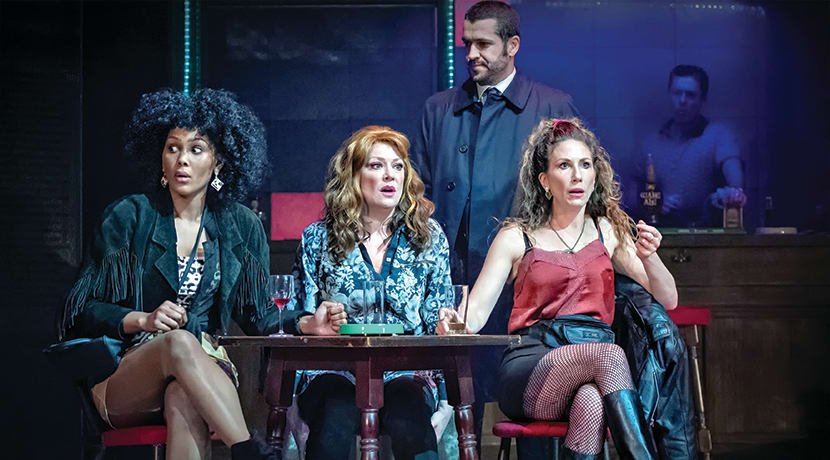 Bringing Band Of Gold to the stage for the first time, writer‐director Kay Mellor is promising fans that they’re in for a treat: “They’ll get all the joy and the suspense they had from the television version,” says the creator of one of the most‐watched shows in British TV history. “But it’s live theatre, so it has that excitement to it because it’s unfolding in front of their very eyes.”

Kay has revised the plot of the first series for the stage version, adding in a few twists to keep it fresh and surprising: “It’s funny and it’s sad,” she says, “and audiences are going to be told a big story not over six weeks but across two hours, with a beginning, middle and end.”

Set in the early 1990s, just as the TV series was, the stage version brings back the iconic characters and moments that made Band Of Gold such a sensation when it premiered on ITV. But the killer of young mother turned sex worker Gina won’t be the same, with Mellor teasing: “I think people will be more satisfied than they were with the TV revelation.”

Leeds‐born Kay was originally inspired to write the hard‐hitting drama when, on the way to a party, she and her husband drove through Lumb Lane in Bradford ‐ a notorious hangout for sex workers ‐ and were approached in their car by a young woman. “It was like someone had hit me in the solar plexus,” Kay recalls, “because she was so young - 14 or 15 - and my daughters weren’t much older than that.”

Haunted by the encounter, Kay left the party early to track down the girl but was told by another sex worker that the teenager had ‘pimp problems’. “I never saw her again, but I started thinking, ‘What is it that drives a woman onto the Lane to sell her body?’”

It took eight years for her to get Band Of Gold onto TV, “fighting everybody and literally begging people to read the script. I was an unknown writer writing about sex workers in the north of England, and who’s gonna put that on television?”

The fight paid off. The show wasn’t just a gripping crime drama, it was a phenomenon. More than 15 million viewers tuned in each week, fans held Band Of Gold parties where they’d catch the latest episode over wine and pizza, and bookies took bets on the identity of Gina’s killer before the big reveal at the end of the first series.

Kay would go on to become one of the UK’s most successful and revered dramatists, penning television shows including Playing The Field, The Syndicate and Girlfriends. She also turned her much‐loved TV series, Fat Friends (which aired from 2000 to 2005), into a hugely successful stage musical, which she also directed.

Band Of Gold remains a firm favourite with Mellor fans. She smiles about people in the street still yelling, ‘What’s happened to Carol?’ in reference to Cathy Tyson’s feisty prostitute, who takes Gina (Ruth Gemmell) under her wing. “And I get in taxis and the driver goes, ‘I love that Band Of Gold. Why don’t you write some more of it?’”

Twenty‐two years on from the series finale, Kay has done just that ‐ opting for a stage version of the classic story with a brand new cast, rather than trying to bring back original stars Tyson, Geraldine James, Barbara Dickson and Samantha Morton for a sequel.

“There’s nothing like sitting in an auditorium listening to your play and hearing people laughing and applauding. It’s absolutely magical. It’s like a drug.”

After reworking Band Of Gold, she workshopped it twice and made big changes, but the anonymous feedback from the second workshop was that everyone would pay to see it and everyone would recommend it to a friend. “That’s when I thought, ‘Okay, let’s take this to the next stage’.

“I decided to set it in its original time period because actually nothing much has changed since then. If anything, things have become harder with austerity and Universal Credit. People just can’t get to the end of the week. There are more sex workers than there were 20 years ago ‐ people selling their bodies basically to feed their kids or make ends meet. It’s more relevant to today than ever before.

“We’ve assembled this brilliant new cast of great actors and some well-known faces, and it allows me to re‐invent Band Of Gold for both its long-term fans and those coming to it for the first time.”

Gaynor Faye, who recently left Emmerdale to be able to star in the play, takes over from Geraldine James as Rose and agrees the Band Of Gold revival couldn’t be more timely: “It’s more than two decades on and I think we’re in a worse position than we were then,” she says. “There’s as much if not more poverty now. People are really struggling and more people are visiting food banks.”

Rose is like the mother hen, ruling the Lane where the younger girls work.

“She’s very territorial and nobody is stepping on her patch,” explains Gaynor, “but she’s a good friend and the kind of person everyone would hope would have their back because she’s tough.”

Laurie Brett plays Anita, “a working‐class survivor who’ll do whatever it takes to get through life”. She rents out a room to the girls for a cut of their earnings. “She’s very multi‐layered and a really interesting person,” says Laurie, who’s best known from EastEnders and Waterloo Road. She was a fan of the TV show when it premiered: “It was extremely gritty and it still is. Plus, it was an honest portrayal of women who weren’t victims. Yes, they were victims of circumstance but not in terms of their everyday lives.”

Coronation Street and dinnerladies star Andrew Dunn is Ian, a counsellor and client with all sorts of flaws. “He has this front as a pillar of the community, but in the background there’s a lot of other stuff going on,” Ian explains. “That’s really interesting to play.”

The role marks a reunion for Ian and Kay Mellor, who starred as husband and wife in the play A Passionate Woman at Hull Truck Theatre in 2010. “Kay was fantastic to work with, so I’m really looking forward to working with her again. Band Of Gold was one of the first dramas to have so many female characters at its centre, and the story is still relevant.  Prostitution may have diversified but it’s still happening.”

Fellow Coronation Street star and X-Factor winner Shayne Ward is relishing the role of DCI Newall, the detective tasked with finding Gina’s killer. Newall was played by David Schofield in the TV original.

Schofield was in his 40s at the time, whereas Ward is in his mid‐30s. His take on the DCI is as a younger man keen to make his mark: “He wants to be taken seriously, and although he’s a nice guy, he’s also now in charge of the investigation so wants to assert his authority.”

After three years on Corrie, Shayne is excited  about going out on his first‐ever tour in a play. “I’m looking forward to how much I can learn from working with so many great actors - and of course with Kay. I used to watch The Syndicate on TV and think, ‘I’d love to be in something like that’, never imagining I’d even get to meet Kay let alone work with her. It’s a massive privilege.”

To research the role of Carol, Emma Osman has delved into documentaries about sex workers: “It’s interesting to see how, even though they have to be tough, they’re also very vulnerable -  just everyday girls in extraordinary circumstances,” notes the actress whose credits include Doctors and Snatch. “They’re so resilient. Carol constantly talks about not wanting to be controlled, to be independent and her own woman. She’s so scared of being abandoned. I really appreciate being given the opportunity to do something so powerful, and to play a character who’s so strong and feisty.”

Sacha Parkinson is equally thrilled to be playing Gina, who is driven to prostitution after splitting from her abusive husband, Steve. Sacha was only three when Band Of Gold started and has made the decision not to watch the series. “That kind of mirrors Gina’s own  experience of going into a world she doesn’t know anything about,” says the former Corrie star, whose CV also includes The Mill and Mr Selfridge. “Getting to work with Kay is an amazing opportunity. Band Of Gold has been her baby for years, so to be a part of her exploring it again is really special.”

Hollyoaks regular and Dancing On Ice finalist Kieron Richardson is making his professional stage debut as bad‐boy Steve, who becomes a prime suspect in Gina’s murder. Kieron has a strong connection to Band Of Gold - his father was an on‐set security guard for the TV show.

As a youngster, Kieran would go along to the set, where he would hang out in Carol’s house and ride around in the blue police van. “Watching them all work is one of the reasons I got into acting in the first place,” he explains, “so it’s kind of come full circle.”

Kay Mellor’s Band Of Gold shows at the Alexandra, Birmingham, from Monday 10 to Saturday 15 February.