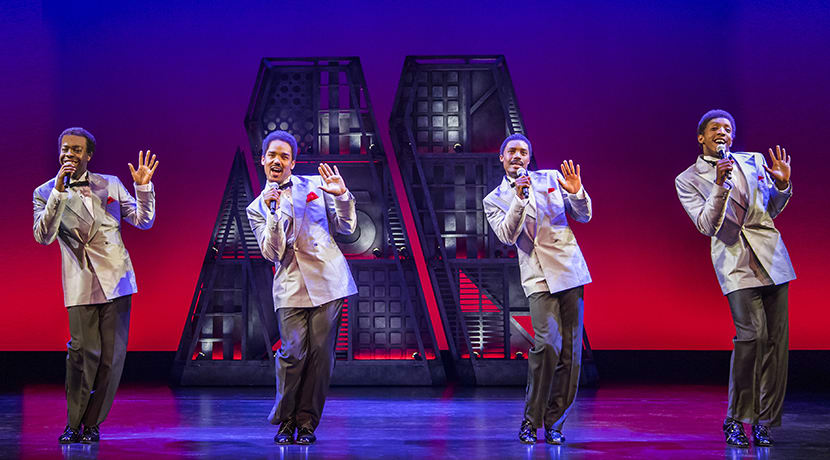 It’s been almost 60 years since the iconic record label, Motown was founded in Detroit, Michigan by the now legendary Mr Berry Gordy. Synonymous with launching the careers of Diana Ross, Marvin Gaye, Stevie Wonder and the Jackson 5 to name but a few, Motown Records enjoyed success on both sides of the Atlantic. Now the story of the record label’s success, and the phenomenal amount of hits it produced, is told in Motown The Musical. Currently a smash hit in the West End, the show embarks on its first ever UK Tour in October and visits the Regent Theatre, Stoke-on-Trent, from Tuesday 21 May to Saturday 1 June.

After decades of working with Mr Berry Gordy at Motown Records, during which he has coached the Jackson 5, produced the likes of The Temptations and The Supremes alongside a successful career as a performer, Michael Lovesmith has now turned his talent and knowledge of Motown to Motown The Musical, working as Creative Consultant. We sat down with Michael and the show’s acclaimed director Charles Randolph-Wright to find out more about Motown The Musical from two of the people who know Mr Gordy, and the show, best.

“I was basically born and raised in music.” Michael tells me, “I was on the road as a child, singing in churches as a trio with my brothers. Then at age eleven I was introduced to Holland-Dozier-Holland, who signed me to a song writing contract, and I wrote my first song for them, to be performed by Dionne Warwick.” Charles Randolph-Wright then interjects, “At age eleven! I just want to make sure that’s clear, you were eleven!” Modest as ever, Michael continues, “It was the opportunity of a lifetime, and it was a good thing I had a good song! I met Mr Gordy at age seventeen, and by that time I had produced about twelve artists. Motown wanted me to work with the ‘Jackson 5’. I was their age, so I could relate to them in a way that not everybody could. They were so used to working with older people who didn’t quite understand their energy! I ended up becoming Berry Gordy’s protégé, and started producing and vocal coaching Michael and his brothers. Then soon after that I started recording with The Supremes and The Temptations. That’s pretty much how I got started.”

Charles Randolph-Wright joined the Motown family at a later stage, coming on board to direct Motown The Musical which premiered on Broadway in 2013, “For me Motown has always been part of my life. The opportunity to work with Mr Gordy was mind-blowing when this project came up because he was and is a major inspiration to me.” His enthusiasm and warmth for the project is clear as he goes on to explain, “In terms of how I got started in directing, my family says that I was directing from the minute I was walking. Theatre fascinated me from my very first experience in the audience. But even as a performer, I always was intrigued by directing and writing. I was in the original cast of Dreamgirls on Broadway and directed a fellow performer’s nightclub act. That lead to several other acts, and more jobs followed. I knew then that would be my focus.”

Motown The Musical tells the story of Mr Gordy’s life and the development of Motown Records in Detroit, Michigan which soon became known as Hitsville USA. What was it like for Michael being at the epicentre of the Motown movement at the time? “I was desperate to get to Detroit and get working in music but my parents wanted me to get through school, so I studied and studied so I could graduate from high school early and from there I went straight to Detroit.” Michael explains, “The funny thing about Motown is, I think Motown could have been anywhere, and in a sense it was.”  Charles begins nodding enthusiastically and adds, “Absolutely. Every city had a girl group, a guy group, a kids’ group and a lead singer but the unique thing that Detroit had was Berry Gordy.”

“He was this beacon of light,” concurs Michael, “showing you what you can do and what you could be. There were musicians and singers all over the country, but Detroit had Berry Gordy so it became a magnet for them.”

Charles explains how that then informed his direction of Motown The Musical, “Of course, that’s what we are able to explore in the show, how Mr Gordy’s ambition and talent founded Motown. It’s not a Detroit sound, it’s a Motown sound. Although some people think Motown is a real place!”

Michael laughs, “You know what though, it almost was.”

With such an iconic sound that audiences have loved for almost six decades, how do you begin the process of faithfully recreating that on stage? Michael looks to Charles, and smiles, “We searched high and low for someone who understands the need for the show to sound like Motown.” he says, “One person came to meet us, and gave us his idea of how he would find a Stevie Wonder, a Michael Jackson, a Smokey Robinson, which we didn’t think was possible, and that person was Charles Randolph-Wright.”

“Oh, you were talking about me!” exclaims Charles, bashfully, “I didn’t realise, I was listening so intently!”

“Charles walked into the room and knew what Motown is, who Motown is and what Motown looks and feels like. He grew up on this music.”

“Motown is all we ever really listened to growing up!” agrees Charles.

Michael goes on, praising Charles’ vision further, “He understood Motown, and that is what we were looking for. We put the show in his hands.”

Did Charles then feel under pressure when directing? “Oh yes, I felt pressure. It was so important to me because Mr Gordy is one of my idols, so I wanted to create the show that he wanted to see. I approached it the way that Berry Gordy approached it – I needed to find artists that would evoke a certain thing. What I never wanted to do was find people who would just impersonate those performers, I wanted them to make me feel the way Diana Ross made me feel, an actress that would actually make me put my hands up and sing “Reach Out and Touch”. I had a goldmine to work with because Mr Gordy and Michael were there to help, and they knew these people before they were the icons they became. I wanted to find people who had what these people did before they became stars. What was that spark, what was that tone?”

“What was great about Charles’ casting process is he would find people who were so good, we wanted to sign them as artists in their own right! He had a vision, just like Mr Gordy. Sometimes I even call him ‘Little Berry’. He understood what to look for.” Says Michael.

Charles goes on to explain “It’s finding that energy, sometimes it’s such raw performers and sometimes it’s people who have been in ten shows. It’s an instinctive thing – they’re Motown. Working closely with Mr Gordy and Michael I’ve been able to ask, what is that thing that Stevie Wonder has, what is that specific thing that Smokey has? We find that in someone that is authentic in them, rather than make them pretend to be that.”

After success on Broadway and in the West End, Michael explains why the team really wanted to bring Motown The Musical to the rest of the UK, “We owed it to the UK. The UK is probably 50% responsible for the success of Motown, it is the heart of Motown and the UK has kept Motown alive. The vibe here is fantastic, audiences are screaming and cheering and it’s incredible, it’s like being back in one of the shows from the 70s. The UK has always loved Motown, and we needed to do this tour because we know wherever we take Motown The Musical in the UK, it will be loved.”

Charles chips in, saying, “What has surprised me the most with audiences is that Motown appeals to every age. I love that each audience member finds some aspect of this show that resonates with them. The show is infectious, and the UK truly knows and loves this music.”