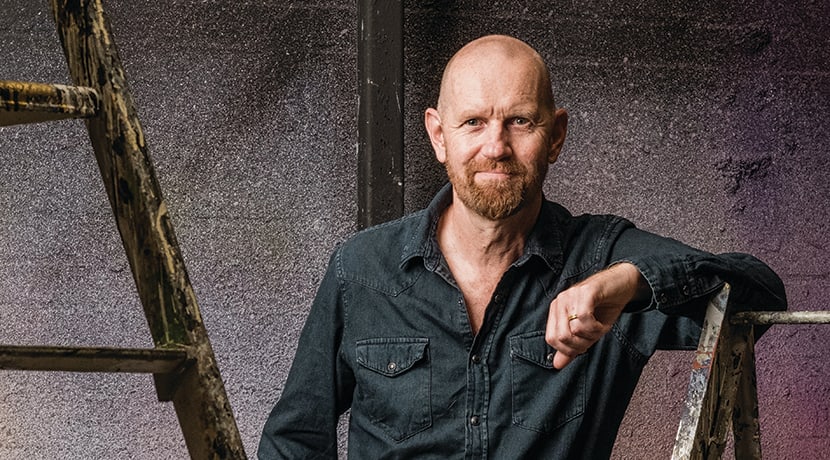 Olivier Award-winning actor, director and writer Sean Foley has his nose to the grindstone at the moment. As the new artistic director of Birmingham Repertory Theatre, the 54-year-old has got his work cut out adding the finishing touches to his first season of productions at the venue, which gets under way in the new year.

“I was quite merrily going along with a freelance directing career, mainly in commercial theatre in the West End and almost exclusively directing comedies,” says Sean, who  co-wrote hit Morecambe & Wise tribute show The Play What I Wrote. “Somebody rang me up and asked me to apply for the job. The more I looked at The REP as a theatre, and at Birmingham as a city - where I have personal roots on my mum’s side of the family and my dad was part of the huge Irish community here - the more I was reminded of how wonderful both are. I was also attracted by the   opportunity and financing for producing at The REP. All of those factors combined encouraged me to apply for the role of artistic  director - and then I ended up getting it!”

Sean is aiming to tap into the theatre’s great potential: “I honestly believe that although The REP has been run tremendously over the last couple of years, it’s nonetheless a sleeping giant - the same with Birmingham as a city. There’s an enormous amount of unfulfilled potential here - such talent and an incredible sense of humour. But I think the city is also self-deprecating in a way that’s not always to its advantage. Here at The REP, we have an 820-seat main house that’s one of the most amazing theatres in the country. We also have incredible workshop facilities that not many theatres have anymore. Then, of course, our classic studio theatre, The Door - historically one of the national leaders for small theatres presenting new plays - brings that word ‘potential’ to mind again. The Birmingham Rep is also in this iconic building. It just seemed like a great place to take over and make into a national hub for great theatre. At the moment, it’s a city theatre that represents the creativity and talent of the wider region, but I do also feel strongly that it should be brought up to a national and international level.”

And how will this be achieved?

“We hope to have a real mix of locally sourced stories created into theatre, and to be a launchpad for bigger shows that can go into the West End or tour nationally and internationally. Personally, my taste is what can be called ‘popular theatre’. I like doing comedies, I like doing musicals. Then, in terms of dramas, there’s such a wealth of Midlands and Birmingham stories that can be told.

“One of the best parts about having three theatres in The REP complex is that it allows us to have such different things running at the same time. We could have a massive comedy tour on in the main house and a really hard-hitting drama with contemporary, social themes or local work in The Door. Then, The Studio theatre, which we share with the Library of Birmingham, is also a fantastically exciting place that we’re going to brand as the starting-point for the country’s best new plays.”

Sean believes that audience satisfaction is the most effective way to catapult Birmingham Rep to national and international acclaim: “Theatre does have a problem, a barrier, where a lot of people don’t think it’s for them. Ultimately, we have to give them a good night out, which doesn’t mean that what we offer can’t be smart, sophisticated and offer up issues or themes that are relevant and difficult. People need to make that connection with theatre, just like they do when they tune into dramas on the telly or go to see a film because it’s a renowned director’s latest blockbuster or features an excellent actor in their most recent role. I want people to always think that everything which comes to the Birmingham Rep is of excellent quality. That’s the bottom line.”

So what professional experience does Sean bring to his new role?

“Well, there’s no other artistic director in Britain who’s received an Olivier nomination or award for acting, directing and writing. I think the fact that I have that range of experience in the creative and performance aspects of theatre really helps, as I can always look at a piece from another perspective and through the eyes of my different disciplines. I think the main way my past will impact my work at The REP is in terms of my unconventional route into the profession. I didn’t go to drama school and go that traditional route. I created my own theatre company and started writing and co-writing original comedies for that. My whole background is quite untypical of an artistic director, and I feel like that fits well with Birmingham, which is a unique city with a pioneering spirit.”

Sean has been joined by two other newcomers at The REP: Deputy Artistic Director Amit Sharma and Executive Director Rachael Thomas.

“Part of the idea when I was appointed was that Amit would join at the same time. Amit’s professional experience is much more in the area of new writing and new plays, so we complement each other in that way with my experience of the commercial theatre of the West End. Amit is also an Asian disabled man. That’s a very important understanding to have at a theatre in a city that’s very diverse and has a high percentage of BAME [black Asian & minority ethnic] residents. It was a bit of a shotgun marriage, but we both have a good sense of humour and seem to have struck it off. I look forward to us working together.”

“From January we’ve got some amazing things in the programme. We’re starting with Asking For It in our main house, which is a contemporary play on the subject of consent. It’s a fantastic award-winning show from the Abbey Theatre - Ireland’s national theatre. I hope we’ll present lots of international work at The REP - particularly Irish work, as it’s on a complete high at the moment. This will be the show’s UK premiere and we’re incredibly proud to be doing that.

“Then we’ll be doing a fantastic comedy written originally by Molière - a French playwright. About 18 months ago, the RSC did a version of Tartuffe but set within a Muslim community in Sparkhill, Birmingham. We’re going to do a new production of that show, bringing it back to its roots.

“We also have an amazing new version of Doctor Faustus coming up, in collaboration with the Lyric Hammersmith Theatre and Headlong Theatre Company, in which Faustus is reimagined as a woman.

“There’s also the incredible Ramps On The Moon project, which strives for the inclusion of deaf and disabled individuals in theatre. They’ll be bringing a fantastic version of Oliver Twist to us.

“There are just so many great things coming up in 2020 that it’s impossible to mention them all - everything’s a highlight in our programme. Then, beyond that, I’m really looking forward to celebrating 50 years of the building in 2021 and then seeing how we’re going to get involved with the 2022 Commonwealth Games. There’s so much to look forward to at The REP.”

To find out more about what’s coming up at Birmingham Repertory Theatre, visit birmingham-rep.co.uk