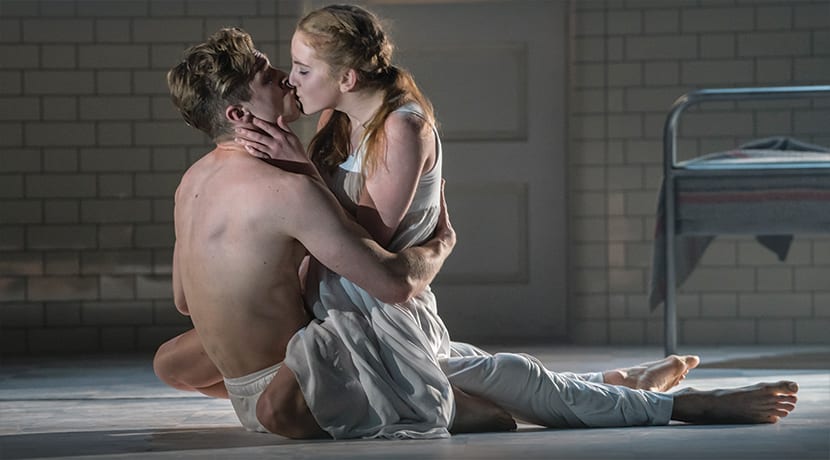 Sir Matthew Bourne brings a contemporary dance reimagining of Romeo And Juliet to the Midlands. What’s On talks to him about his dystopian interpretation of Shakespeare’s famous tale of forbidden love - the first new production from his New Adventures company in three long years...

There aren’t many, if any, more distinguished figures in the dance community than Sir Matthew Bourne, whose choreography has featured in musicals, theatre productions and movies for more than 30 years. His own company, New Adventures, brings a new production of Romeo And Juliet to Birmingham this month. Shakespeare’s classic tale of star-crossed lovers appears to be the perfect fit for the passionate and expressive art form of dance.

Combining Bourne’s choreographic expertise, an adaptation of Prokofiev’s famous score and a story by the world’s greatest-ever dramatist, the production promises to be a show-stopping interpretation of one of literature’s most famous tragedies.

“I avoided doing Romeo And Juliet for years,” explains Matthew. “I think it was something everyone expected me to do, and it had been done in so many different ways in so many different mediums. I thought it would be hard to find a new way into it, which is something I always search for. The thing that really made me want to do it was the opportunity to work with young people. It’s a story about them, and about young love. I got even more excited when it was suggested we cast it with young people and work with young creative associates in all the different departments of the show, alongside my usual world-class team. It’s all about nurturing young talent and telling the story.”

The intense tale of love at first sight, family feuds and death is one that works well as a dance piece: “The medium is very good at extreme emotions, and Romeo And Juliet as a story is certainly full of those. It has passion, love against the odds, and several extremes of murder and violence. It’s all those big emotions. Shakespeare captured it very well.

“Young people are very hot-headed and react very quickly to things. One thing I’ve tried to bring out is that when young people first fall in love and feel that passion, they really go overboard in many ways. I often think about how classical ballet handles this, and how the young girl gets very excited by a kiss on the cheek. Young people today, if they’re into each other, are kissing until their mouths are sore. I have tried to capture that intensity.”

Matthew’s desire to stage Romeo And Juliet in a new and thought-provoking way led to him setting his production in a dystopian world where love is forbidden...

“It’s set a little way into the future, but it’s not quite futuristic. It’s a time when society is frowning on young people having the excess of feeling and emotion which sends them off on wrong tracks as far as that society is concerned. I got the idea from Arthur Laurents, the co-creator of West Side Story, who was asked why the young people in it are violent and act the way they do. He said that they have too much feeling and need to find a way to release it. I thought that was an interesting way into the story and very true. It made me go in the direction I went in.”

Matthew’s vision even meant that Prokofiev’s magnificent score had to be tweaked for the production: “While it’s wonderful and lush for big opera-house productions, I wanted something a bit more earthy and a bit more quirky. We nervously went to the Prokofiev Estate and asked them if we could do a new arrangement. It’s very faithful to Prokofiev’s and it’s only 15 musicians who multi-task and play lots of different instruments. It’s quite rare for us to take an orchestra out on tour with us, but it’s sounding wonderful and I hope the Prokofiev Estate is happy. It’s a very recognisable score and that is really the script that we work with.”

This world premiere tour of Romeo And Juliet follows a similar model to Matthew’s Lord Of The Flies tour, in which the production was used to support emerging dancers by having them perform alongside New Adventures’ professionals. Three of the young men from Lord Of The Flies have been cast in Romeo And Juliet, while others in the new production formed part of Matthew’s 2019 Swan Lake company.

At each venue on the Romeo And Juliet tour, six up-and-coming dancers - three male,  three female - will work with New Adventures: “They’re an integral part of the show, not just token appearances. They’re part of the main company. Our success stories from Lord Of The Flies have gone through several programmes that we run to nurture young British-trained dancers. We’re very proud of those young guys, and we hope that this time we will bring into the fray some women who we’ve nurtured. We hope that will mean that even more people who started in Lord Of The Flies or Romeo And Juliet will come back into the company.”

New Adventures have certainly had a stellar year so far, putting on four major productions, including company favourite Swan Lake. And Matthew himself has also enjoyed major success, being recognised at the Olivier Awards for his services to dance.

“It’s been amazing. Swan Lake coming back is always a thrill because it introduces so many more people to dance and to our company. It always has an incredible effect on audiences around the country, and our casts are so devoted to it. Then, getting the Olivier Special Award right in the middle of creating a new show was rather good because the award can feel a bit like it’s the end of your career and people are saying, ‘Thank you, please stop’. So it felt great to be in the middle of a new creation like Romeo And Juliet. This year has been about the past and the future at the same time.”

Despite his early misgivings about staging Romeo And Juliet, Matthew is very positive about his vision for the production: “What started out as quite a scary project involving so much untested talent and so many unknown young people has ended up being rather an exciting new show.”

Romeo And Juliet shows at Birmingham Hippodrome from Tuesday 10 to Saturday 14 September.