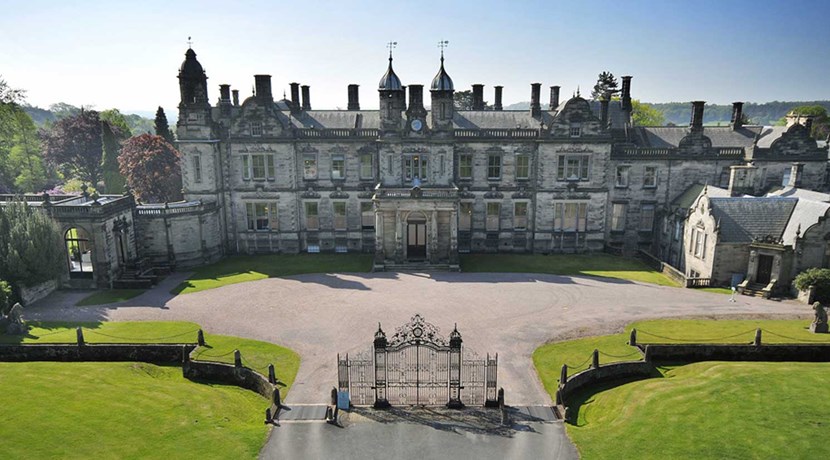 Sandon Hall is a 19th-century country mansion, the seat of the Earl of Harrowby, at Sandon, Staffordshire, 5 miles northeast of Stafford. It is a Grade II* listed building set in 400 acres of parkland.

The Manor of Sandon came to Thomas Erdeswicke by marriage in about 1339 and was held by that family until the death of Sampson Erdeswicke in 1603. Thereafter it passed by marriage until it came to William Hamilton, 2nd Duke of Hamilton in the 17th century. The old manor house was replaced by a new house built in 1769 for Archibald Hamilton by Joseph Pickford of Derby.

The estate was purchased in 1776 by Nathaniel Ryder, 1st Baron Harrowby, who retained the architect Samuel Wyatt to carry out extensive extensions and improvements. The house was severely damaged by fire in 1848 and was rebuilt in 1852 by Dudley Ryder, 2nd Earl of Harrowby to a neo Jacobean design by architect William Burn.

In the park stands a Doric column erected in memory of William Pitt the Younger in 1806.

The current owners are Conroy Ryder, 8th Earl of Harrowby and Caroline Ryder, 8th Countess of Harrowby. They have renovated a public wing and fifty acres of gardens for weddings.

It also has a role as a beautiful venue for weddings.