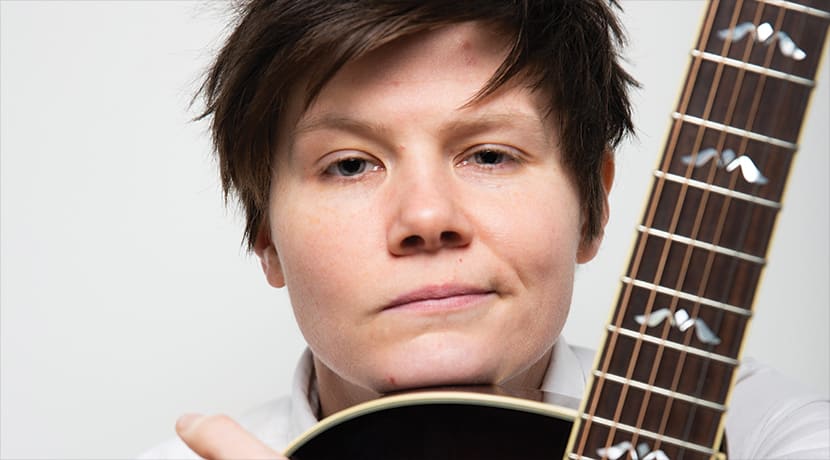 You’re playing at Shrewsbury Folk Festival this year. Have you played there before, and what can the audience expect from your performance?
I haven’t played there on my own. I’ve been a part of a couple of other shows, so it’s my debut show there in my own right.

I’m a protest singer, so I sing a lot of shouty songs about politics, and obviously in this current climate, I don’t have a lack of things to write about. I’m a socialist, feminist, political singer really, so it’s all lefty stuff. I’m a proud queer artist as well, and that’s quite a big part of what I write and sing about. It’s definitely not for the faint-hearted.

You’re sharing the line-up with some big names - Kate Rusby, Oysterband, Skerryvore, to name but a few. Who are you most looking forward to seeing?
I’m going to be hanging around as much as I can, although I’m due at the Edinburgh Fringe the day after. I’m really looking forward to seeing Kate Rusby. I played her   festival, Underneath The Stars, last year and had a great time but didn’t get to see her because we weren’t performing on the same day. So she’ll definitely be a highlight for me.

When did your interest in politics begin?
I think it was when the government changed in 2010. I saw austerity coming in and the impact that that was making across the country. Being gay, I was quite concerned and alarmed when Theresa May was appointed in the role of women & equalities minister because her record on LGBT legislation is not good.

That was the tipping-point that inspired me to start writing. I wrote a song called Farewell To Welfare back in 2010. It was the first thing that I’d ever written about politics. It wasn’t intentional; I just got cross one day and wrote a song that was basically a three-minute rant. For whatever reason, that really struck a chord with audiences and they started talking to me more about politics. I started getting more interested in activism and campaigns, and it became more of a self-sustaining thing.

Your political writing reflects what’s bothering you most. What’s currently bothering you most?
Well, we live in incredibly reactionary times, and in general I'm finding it all quite terrifying, to be honest. The rise of the far right in general. I think it’s often the case that minorities are a real indicator for the overall political direction that we’re moving in. I think the minorities are treated as the canary in the coal mine, and I feel, not to harp on about this, that as a gay person, the sharp, steep rise in homophobia and transgender phobia that I've seen in Britain in the last six months is awful. There was a viral story about a homophobic attack on a queer couple in London, for example. That isn’t unconnected to the protests outside schools in Birmingham about LGBT education, and that itself is not unrelated to the treatment of trans people in the mainstream media across the world, and that is not unrelated to Donald Trump’s             presidency. The key to all of this is solidarity between our communities and between our minorities. I think that it’s very easy for us to lose sight of the bigger picture when we’re all just focusing on our one little corner. I’m writing lots about that at the moment.

Will the potential second term of Donald Trump feature?
I imagine so. He keeps me very busy! I’ve got a lot of material about him already, but all I can do is keep going. I make these jokes on stage that I started writing songs to try and make the world a better place, but I think I seem to be making things worse! I’ll keep going and hope the trend turns at some point.

Did you always want to be a performer?
I did always want to, I think. I started playing the guitar when I was 13, but before that, as a young child, I played the piano. I’ve always been a bit of a show-off. Music was the obvious place to take the narcissist energy that I have. I’ve been tremendously lucky with growing up in the time that I have done because I think that I’ve been a completely DIY outfit from the beginning. Everything that I’ve ever done has been self-published. I think that’s the great thing with living in the internet age. If I’d been born 20 years earlier, I don’t think I would’ve been able to have the career that I’ve had. It’s definitely what I wanted to do, and every day I can’t believe how lucky I am that I pulled it off.

You’ve brought out six albums. How much has your music evolved over time?
It’s evolved a lot. I’m delighted to be playing Shrewsbury Folk Festival because I came into folk quite late in comparison to my peers. I had this quite inaccurate impression of what folk music was. I grew up listening to Bob Dylan and Joni Mitchell, and I didn’t really know anything about traditional folk music. I play in a six-piece band called Coven, and we’ve done Shrewsbury before - that’s with O'Hooley & Tidow, Lady Maisery and me, and we make a six-piece feminist collective. It’s those guys who I really got influenced by. I’d never really experienced the folk club scene before. My background is punk really, and I’ve worked in comedy a lot. Folk has certainly inspired my songwriting on this last album, and what I'm writing at the moment has a pure folk influence.

Speaking of influences, who’s been your biggest musical influence?
Singer-songwriter is where it is for me. I absolutely love Bob Dylan, Tracy Chapman, Joni Mitchell - people with a message to what they’re singing. Bruce Springsteen. I'm very much more a lyricist than I am a musician. A ‘poetry set to music’ type of thing.

Who do you relate to most as an artist?
There’s an Australian singer-songwriter called Darren Hanlon. He’s absolutely phenomenal and a beautiful wordsmith. And there’s a guy called Gavin Osborn, who’s based in South West England and writes beautiful songs. I’ve been lucky to do some touring with him.

Billy Bragg invited you to appear on Glastonbury’s Leftfield stage in 2010. How did that come about?
I went to a gig of his, was totally starstruck and thrust one of my homemade home-printed CDs at his chest. He was very gracious about it. I never expected to hear from him, and then a couple of weeks later, I got an email saying, ‘Do you want to come and play at Glastonbury?’ I absolutely couldn’t believe it, I was just blown away. I will never forget it.

What plans have you got for the future?
I’ve got some really exciting things happening next year, which I'm not allowed to say too much about. I’m going to get to play in some beautiful faraway places that I haven’t been to before, which is really exciting for me. I’m hoping there will be another album out in the autumn of next year - I'm writing a lot at the moment. I had an album out in September just gone, and I'm kind of bored of it already, so I need to get into the next round of songs. I’m on tour throughout this October too, so I’m really looking forward to that and whatever other opportunities happen along.

For more information on line-up and tickets, visit shrewsburyfolkfestival.co.uk