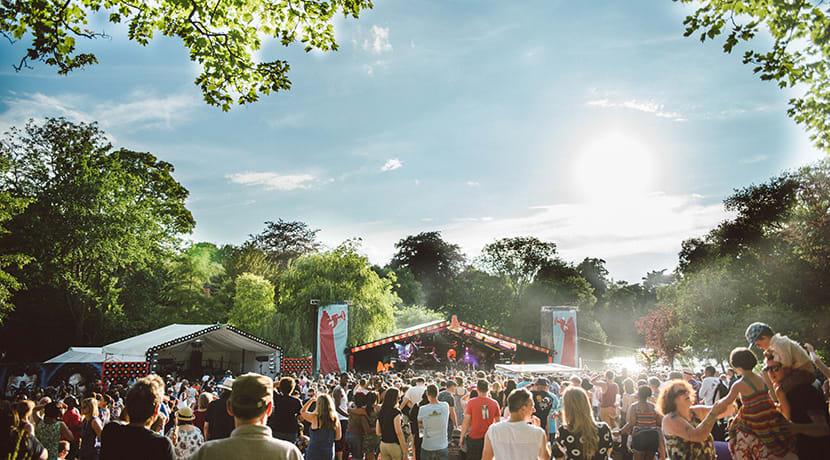 Mostly Jazz Funk & Soul is a popular annual event which attracts visitors from all over the world and plays host to a weekend of blistering live music, both from contemporary breakthrough artists and international legends.

And speaking of legends, this year’s festival is headlined by The Jacksons, The Brand New Heavies and the incomparable Burt Bacharach.

How did it all start, John?
We began with Moseley Folk Festival, which is now in its 14th year. It was initially a gathering of a few hundred people, and has just grown and grown. As the folk festival got more popular, we decided to bring our other musical interests into play and launch another festival. It started out as Mostly Jazz Festival, but everybody assumed it was just pure jazz, so we changed the name to Mostly Jazz Funk & Soul about eight years ago. People really bought into the new name because it sounds so much more like a party. It’s amazing how it’s grown.

Why Moseley Park?
It’s just a beautiful location. I think even some people who live locally have never been there - you need a key to get access. Anyone can get the key, though; they can go over to the travel shop across the road and get the key for the day. We’d never move from Moseley now - we’re so blessed to have that site. At times, when we have a big line-up, it’s frustratingly small because we can’t get more people in, but equally I think it’s a blessing. We’re very happy and proud to be able to put our festivals on there.

How did you get involved?
I used to run the office for a medical company, and whilst I was doing that, I was also playing music. I was in a band called Goodnight Lenin, and we got booked to play Moseley Festival - we headlined the second stage one of the nights. Carl from the festival got involved with the band and just asked me whether I knew anyone who wanted to be a festival assistant. I told him that I was bored of business life so I’d come and do it. Now I’m Festival Manager, so it’s worked out really well. I’ve been here eight years.

What’s been the highlight during your time with the festivals?
I think the one that everybody talks about is Chic. We all knew the Chic back-catalogue - all the tracks and artists that Nile Rodgers has been involved with - that’s why we booked them. Between booking them and playing the festival, they released Get Lucky with Daft Punk, and it was the most in-sync thing that could’ve happened. A year after that, their fee was 10 times higher. We wouldn’t be able to afford them now. Due to capacity, there’s only so much that we can spend...

Public Enemy were brilliant. They stepped in a month before because Sugarhill Gang pulled out. No disrespect to Sugarhill, but it was definitely a case of burying bad news with some really good news, and it proved to be a really great atmosphere...

For the folk festival, I'd say Johnny Marr - I'm a massive Smiths fan. Generally speaking, I say hello and thank you for coming etc to the artists, but I try not to pester them. I leave them alone to do their thing, but I had to go and chat to Johnny. He was one of the nicest men ever. Billy Duffy came from The Cult, and they played I Fought The Law, which was really cool. Johnny came out and we sat by the lake and spoke for about half an hour. I had to keep reminding myself that it was him!

Is there an artist who you’ve continually tried to bring to the festival without so far been successful?
Erykah Badu. I haven’t managed that one yet. Earth Wind And Fire. For the folk festival, Seasick Steve I’ve tried a few times. Any of Crosby Stills & Nash would be mega. Our directors have definitely put in a few offers for Neil Young to play solo, but understandably he’s not decided to come and play to a 3,000-capped festival in Moseley. We’ll keep trying, though...

Of the three festivals that you produce - Moseley Folk, Mostly Jazz Funk & Soul and Lunar, which has the greatest appeal to you personally?
It’s really difficult because when I started, I was an out-and-out folky/Americana kind of person - I love Simon & Garfunkel etc. But as I got involved with the jazz festival, it kind of changed. I think the folk this year is one of our more well-rounded line-ups. Lunar, for example, we’ve had Television on, but I could never put them on at the folk festival. Because we had two festivals, we tried to keep the line-ups quite separate - more folk and Americana for the folk, then more indie and psychedelic for Lunar, but now that that’s not happening this year, we’ve kind of pulled that back into the folk. Last year, I feel that it lost a bit of its oomph and bands that punch it out a bit, so we’ve kind of combined them this year. Obviously it’s Moseley Folk & Arts this year, for the first time, so we’ll have loads of comedians and stuff. It just feels like the line-up is much more rounded.

What do you dread most in the lead-up to the festival?
Bands turning up is an obvious one, and missing things, I suppose. Going back a while, we were sent a tech spec from a band who were coming over from Canada, and I was double-checking everything and sending everything out to the artists to make sure that everything was correct. But no one got back to me until the night before the festival, and there was a keyboard missing. There were only three in the country, as it was a very specific keyboard, and they were all hired out. We managed to contact another festival that had hired the keyboard for that band on the Saturday, and we got my friend to drive down to the festival and pick up the keyboard for the Friday evening. A lot of it is about  troubleshooting; things do go wrong constantly, and you get used to that. I suppose you’re nervous anyway because you’re responsible for more than 3,000 people - and not just in terms of safety; you’re trying to make sure everyone’s having a good time, too.

What piece of advice would you give to someone who was thinking about hosting a first-time festival?
Start small and don’t do it for money. If you’re doing it for money, it comes across. Have an identity and grow it organically. That’s the only way to do it unless you’ve got billions of pounds in the bank and you can afford to lose money for three years, because that’s what happens unless you’re very lucky.

You like to champion local talent, so which band/artist should be on our radar this year?
Someone who’s underrated is Sam Redmore - he’s a DJ from Birmingham. He does a lot of club nights and has started to play across the country now. He does a lot on Craig Charles’ show, and his Soundcloud has 700,000 followers; he’s really growing. I’ve never had a bad time at any night I've been to where he’s been playing. I hope he gets the credit he deserves because he’s a hardworking guy, too... Also, Young Pilgrims are really cool. A brass band, all former Conservatoire kids, they’re really good. Boat To Row are in the middle of planning their album release, and they’re headlining at the folk festival on the Sunday night. A new band I like is Saint Alto, who’re playing the Friday of the folk festival.

Who are you most looking forward to seeing at this year’s festivals?
Definitely Burt Bacharach. The Jacksons are going to be a lot of fun. At Moseley Folk, you’ve got The Zutons. Hearing Valerie at Moseley Park is going to be incredible. I guess Don McLean. We’ve tried to book him for a few years and have actually managed to get him this year. Vincent, American Pie, Castles In The Air are all massive songs to me, so I think that’s a really nice way to end the festival season - on a high.

How do you see the festivals progressing in the next 10 years?
This year we’ve brought an arts element into Moseley Folk, so that’s our first stepping stone. We’re going to have a stage for comedy, talks, and eventually podcasts and film. Obviously it’s a very small site, so we’ve got to see how that all flows. We’ll look to do a similar thing with the jazz. The jazz is very music-focused, but there’s also loads of great food to enjoy - Original Patty Men and all these really cool independent food traders will be there - so that’s a step up this year. I’d like to see comedians and cabaret and film brought into the jazz, to give it another dimension. I think next year that’s definitely what we’ll be looking to do. I’m already looking forward to that!