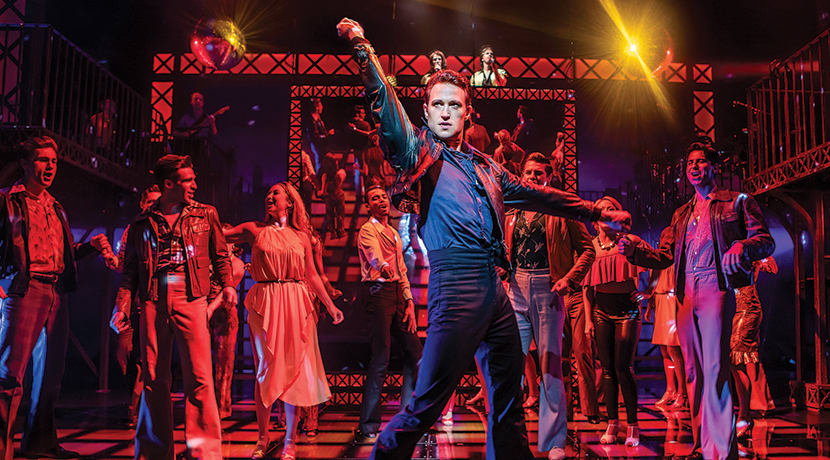 The theatrical version of Saturday Night Fever is strutting its stuff in Coventry next month. What’s On caught up with star of stage and screen Richard Winsor to find out how he feels about walking in the ‘boogie shoes’ of lead character Tony Manero…

From being a principal ballet dancer at Sir Matthew Bourne’s New Adventures and starring in BBC’s Casualty, to dancing to Bee Gees hits up and down the country, Richard Winsor really has done it all.
Richard, who also took on the lead role of Tony Manero on Saturday Night Fever’s previous tour, is looking forward to strutting his stuff once again.

“I’m honestly so excited to be returning to play Tony,” he says, “but I also know it’s going to be very different to the last time I toured with this production. There’s quite a new cast - only five people, including myself, are returning performers - so it’s going to feel quite fresh for me. Plus, there are some new ideas I want to throw into the mix in terms of developing my character."

Although he has a liking for musicals in general, Richard is particularly drawn to Saturday Night Fever: “Mainly I like stage shows that have a bit of grit and drama. The film is very gritty; it’s really quite dark in places with its depiction of 1970s austerity and drugs, sex and rock’n’roll. Initially I was approached to be in Saturday Night Fever after I’d left Casualty. I was interested in the brand new production in particular, rather than the other touring version that’s been around for ages, because the new show really goes back to the film to make it raw and authentic.”

Playing the character of Tony Manero was also a very attractive prospect for Richard: “The chance to play Tony, to put my own spin on the character and make my mark on the production as a whole, was really an opportunity I couldn’t miss. There’s always the fear of copying John Travolta, because he made the role so iconic in the original movie, but as an actor, you’ve got to really take the nitty gritty of the character and see what he’s about. I definitely came into this to play Tony Manero rather than to imitate John Travolta. So that also makes this role very rewarding. Then, finally, the opportunity to combine my dance background with my acting career was perfect for me.”

Tony’s passion for dance and his ambitious nature is something that Richard relates to: “To a certain extent, I do see parts of myself in Tony. When I was younger - so before I worked with Matthew Bourne - and wanted to pursue dancing as a career, it did seem like an uphill battle, and one in which I was also        trying to discover my own identity, much like Tony is. Tony is always striving for something different, something new that no one else is trying for, to get away from the mundane reality of everyday life. I can relate to that in my own performance aspirations, for sure.”

So which moments in the show really stand out for Richard?

“One of my favourite scenes is the first club one because Tony slowly starts to command the attention of everyone around him and ends up sort of taking over the club. Then the family scenes also stand out for me as really providing Tony with some depth of character. My favourite song from the production is Should Be Dancing, which ends the first act with a massive number. Should Be Dancing is such a good song and made even more brilliant by our powerful live band.”

Richard has some theories as to why Saturday Night Fever continues to be such a popular story: “I guess the music is the driving force behind this show, and the music of the Bee Gees is so timeless. I think some of the themes are also very relatable. Even though it’s set in the 1970s, there are definitely things that are relevant now, such as misogyny, race, religion and issues with kids drinking too much and taking drugs. Family struggle is also at the heart of Saturday Night Fever. It’s just a great, timeless piece of theatre that will appeal to people wanting not only a feelgood factor but also a bit more depth.”

Richard is hoping to make the most of his  success on both stage and screen, and certainly doesn’t want to choose between the two: “I wouldn’t say I feel more at home on the stage, despite my long history of performing there because of my dance background. Television requires a very different kind of focus as an actor. I wouldn’t say I prefer one or the other. I do love the feeling you get performing to a live audience.

You get that instant reception which you don’t get from television, and I love the vibrancy of the           theatre audience, especially with a show like Saturday Night Fever, where they’re so into the story and the music. But I do prefer a bit of variety in my career. Overall, I’d like to do more theatre, particularly straight plays, and some drama on TV.”

For now, though, bringing Tony Manero to life on stage in the Midlands is very much Richard’s focus, and it’s a challenge that he’s certainly looking forward to: “I would say that Saturday Night Fever is not only a big, beautiful crowd-pleaser with insane songs played live by a big band and perfect Bee Gees singers - it’s actually like you have the three Bee Gees there on stage singing every harmony - the show is also a really hard-hitting, gripping drama. This production really is the full package, so you’d be crazy to miss it!”