Shane Richie talks ahead of The Entertainer 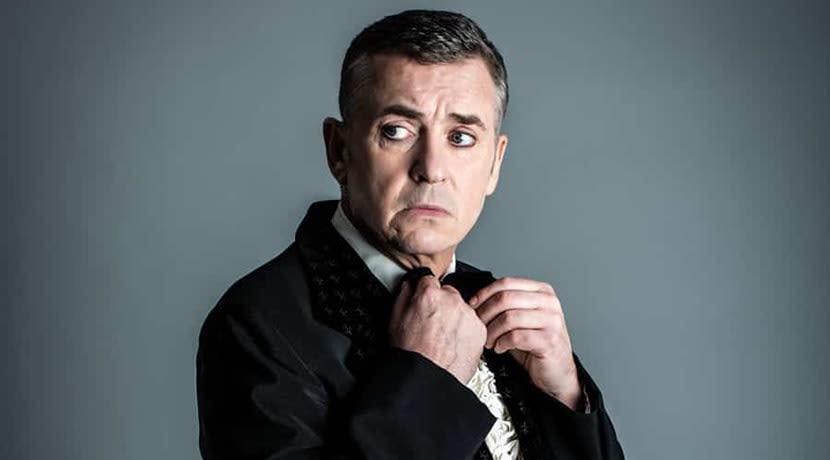 John Osborne’s The Entertainer, widely considered to be among the greatest plays of the 20th century, is this autumn touring for the first time ever.

West End and EastEnders star Shane Richie talks to What’s On about playing the character of Archie Rice, one of the most iconic roles in British theatre...

Written by John Osborne in the 1950s, The  Entertainer tells the story of washed-up music hall star Archie Rice. A performer long past his expiry date, Archie is struggling to negotiate the changing sociopolitical landscape of the mid-20th century...

Heading out on tour for the first time ever, The Entertainer has been updated somewhat - to the 1980s - and unfolds against the backdrop of the Falklands War and Margaret Thatcher. The production is directed by Sean O’Connor and stars Shane Richie - best known as EastEnders’ Alfie Moon - in the title role.

“The Entertainer really is like nothing you’ve ever seen before,” says Shane. “If you don’t have a sense of humour or you’re easily offended, you might not enjoy it! It’s a real tough piece - a real slice of social realism - and deals with sexism, racism, homophobia... all the things that are still around today to some degree. Most of all, though, it’s a thrill to watch because it’ll really get your back up and show you how much society has or hasn’t changed socially and politically over the last 30-odd years. If I wasn’t in it, I’d want to see it!”

Archie Rice is a role that’s been earmarked for Shane for over a decade: “I was approached by the director, Sean O’Connor, about 12 years ago. He spoke to me about it when we met while I was working on EastEnders. I was too young at the time, so he told me he’d wait until I was in my mid-50s because he was sure I’d make a great Archie Rice. So I guess I’ve been clock-watching since then!

“The characters I’ve played in the past have been likeable, whether that be Alfie Moon or on Benidorm. To play Archie Rice, who’s so out of step and such a total opposite, goes against everything I’ve ever learnt as a performer. Obviously, when you go out on stage as a stand-up comic, you want people to like you. Archie Rice doesn’t care whether you like him or not, and he goes against all my principles. I like stretching and challenging myself, pushing how far I can take the character, so that’s also why I wanted to play Archie. I’ll also be following in the footsteps of the likes of Laurence Olivier, Robert Lindsay, Michael Gambon, Kenneth Branagh - it’s a real thrill and an honour.”

Shane has no worries about the update from the ’50s to the ’80s: “If you’ve never seen the original, it won’t matter. This is almost like an entirely new piece all on its own in terms of the setting. Whereas the original is set against the backdrop of the Suez Crisis, this version deals with the Falklands. A lot of people who were around in the 1980s will remember that the face of comedy was really changing then. We had new, upcoming sitcoms like The Young Ones and Spitting Image, and comics like Archie Rice just became dinosaurs overnight. So The Entertainer is basically about how Archie can’t seem to cope with that and just loses his s*** really!”

Shane thinks the play really resonates in 2019: “It seems that every 30 or so years there’s great social and political change. I think we’re in that place now, just like we were back in the ’80s with Margaret Thatcher’s government, the Trades Union  disputes and the Falklands. I feel like The Entertainer allows us to question and explore how much we’ve actually moved forward. It will be interesting to see if those who come and see it think we’ve progressed that much or not - so in that way, it’s really exciting.

“Back in the day, The Entertainer came out as a real state-of-the-nation play, off the back of John Osborne’s other major work, Look Back In Anger. Osborne was a real maverick. He was part of a group of playwrights who made theatre for and about the actual working class. He turned that on its head, though, and made stark social commentary by putting a mirror up to the audience. So the play was really relevant back then, and I think we can still see a bit of ourselves in it now.”

Given the wide-ranging nature of his showbusiness career, it’s fair to say that Shane himself is something of an ‘entertainer’. His CV includes stand-up comedy, straight acting, and performing in the West End as a drag queen...

“I’ve just finished playing Hugo - also known as drag queen Loco Channel - in Everybody’s Talking About Jamie. Hugo is a character at the complete opposite end of the spectrum from Archie Rice. Everybody’s Talking About Jamie is all about diversity and embracing everyone, regardless of differences. Archie is the polar opposite. He’s racist, homophobic, sexist - so far removed from the subject matter of Jamie. I’ve loved having the opportunity to play both characters this year, as it’s really   exciting for me to do such different projects.”

Playing Archie Rice seems to have brought Shane’s career full-circle: “I started off as a jobbing actor at the age of 15 or 16. I did a  couple of seasons in holiday parks, where in between acting jobs I had a stand-up act. So coming towards my 20s, I was performing in pubs, clubs and anywhere I could, just to keep my head above water. So that’s where it started for me. Playing a character like Archie Rice now is really interesting because I’ve seen him; as I was starting off my career, the careers of people like Archie were coming to an end.”

Shane has every intention of going one better than Archie by remaining in-demand: “When this tour is over, I’ll be doing panto - another completely different role. Then next year I’ll be going on tour with Everybody’s Talking About Jamie, and then I’ll hopefully get to have a holiday. I know that Tootsies has just opened on Broadway, and I’d love to be in it if it came over here to the UK. I’d also love to play Sweeney Todd.”

For now, though, Shane is concentrating on The Entertainer - and firmly believes that audiences should grab the opportunity to see the production with both hands: “This show has never toured the UK before, and there’s a reason for that - it really is asking the audience who we are as a society. In the show, I’m doing some very different stand-up to what I’ve ever been used to, so it’ll be interesting both for me and the audience. The Entertainer really isn’t to be passed up!”