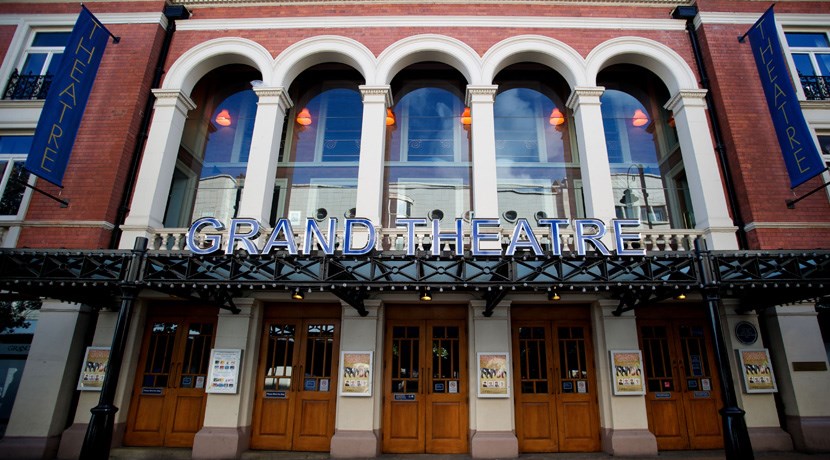 Wolverhampton Grand is a long established theatre in the heart of the Midlands. It receives a wide range of major touring productions including drama, musicals, ballet, dance, opera, variety, concerts, children's shows and one of the biggest pantomimes in the UK, with audiences from across the region and beyond taking advantage of excellent transport links to the town. Admired by performers and audiences alike for its intimate three-tiered Victorian auditorium, the Grand celebrated its 120th anniversary in December 2014.

Adrian Jackson first visited the Wolverhampton Grand Theatre in 1978. Thirty-seven years later he has returned to the venue as its new Chief Executive. In the intervening time he’s developed a successful career as a leading conductor, both here in the UK and further afield. Enthused with ideas, Adrian recently took time out from his busy schedule to talk to What’s On about the exciting plans he has for one of the Midlands’ top theatres, including a new front of house and bar area.

It could be said that you’ve hit the ground running with the Grand’s new, redesigned front-of-house areas, Adrian. What other developments do you have planned?
I want audiences to get excited the moment they step over the threshold. The experience has got to start there. I remember when I came for my interview, I sat in the foyer and I could see exactly what I wanted to do with the theatre. I could see people sitting having a drink and there being a little bit of entertainment going on - live music in the background. When I was lucky enough to get the job, I thought to myself, you know what, with the wind in the right direction, we could actually achieve something this year that would make an impact.
I set up quite a lot of meetings rather quickly and we decided to make the most of the long, dark period the theatre has over the summer. Everything has just seemed to fit, and the staff have really bought into it. Without their support we wouldn’t be able to make it happen. We set up a little design group so that everybody could have an input. One of our front-of-house staff has a degree in design, so he’s had a major input on the look of the redesign. It’s very much been a team effort.

That’s your short-term goal. What are your medium and long-term goals for the theatre?
The industry is changing. There are a lot of new producers on the scene. The Grand has a wonderful tradition of putting on great theatre and clearly we’ll carry on doing that. My artistic vision is to carry on doing the things that people love, but also develop, diversify and change the experience. The stalls revamp is the beginning of a number of phases. Creating the new bar area and a little performance space will enable us to do things that we couldn’t do before. We can have a comedian, a musician, an actor or maybe even a small drama company perform. It will be something that’s very intimate - a performance where the audience is there with them, rather than there existing a barrier between the audience and the stage.
The core work of the theatre will continue because the programming is successful, but there’s no reason why we can’t do more intimate productions as well. And if the idea takes off, my vision will probably go beyond that.

Can you foresee the theatre moving towards becoming a producing house on a small scale?
Definitely. That’s where it started. The Grand theatre has a history of producing and I’d love for us to be doing that again. There’s no reason why we can’t put our own productions on the main stage, and there’s no reason why the Grand couldn’t put a production together and take it on tour. There are a whole host of possibilities.

As a practising musician, how do you see your personal preferences influencing the theatre’s programming?
What I like and don’t like shouldn’t influence what happens on stage. You’ve got that genre that fits into the popular category, things that people want to go and see. It’s something that always sells well and people want it. But you’ve always got to remind yourself that you have to give people the opportunity to see things that perhaps they’re unsure they’ll enjoy. You have to tempt them to diversify a bit. Being a musician, I think live music is extremely important, and I’d like to bring a little bit more of that to the programme. The acoustic in the main auditorium is lovely, so why not get an orchestra in and put on a classical concert? I’d like to look at the possibilities of perhaps introducing something a little bit different whilst also maintaining that core requirement, things that people love about the theatre.

Do you see yourself ever performing at the Grand?
In the fullness of time, yes, but my role is as Chief Executive and there’s a very important and busy job to do here. At some point when the time’s right I may well venture on to the stage.

How would you like to see the theatre develop within the wider cultural and entertainment scene in Wolverhampton?
I put a great deal of importance on education and community. We have a really good education department and I feel it offers more than just performances. It offers people the chance to learn, to create new skills and to develop confidence. One of the things I’m currently looking at is introducing a volunteers scheme to complement this; to bring in people to work with staff and to potentially get access to employment. I introduced this at the Lichfield Garrick and it was a phenomenal success.
Theatre is a pivotal and very important part of any community. We’re wanting to develop that and penetrate the community even deeper.
The new performance space that we’re going to create will enable us to reach out to a different line of people. I’m thinking of lunchtime cookery demos where we get in local and nationally known chefs to do something intimate, with maybe one hundred people in attendance. Something that will appeal to a different part of the community. I want the bar to be there for the people of Wolverhampton who’ve maybe just left the office. I’d like them to choose to come to the Grand and have a drink because there might be some live music on, or there might be a comedian doing a set. Something happening that would excite them. These might be people who don’t usually visit the theatre, and this might be what’s needed to whet their appetite to explore that world.

What was your first theatrical experience?
It was here at the Grand. It was 1978 and I was performing in the West Bromwich Operatic Society’s production of The Music Man. My grandparents were members of the society and there was a part going for a kid who could act a bit, sing a bit and play the trumpet a bit. I auditioned for the part and got it. I knew I wanted to perform at that point but I didn’t want to be an actor and I didn’t want to be a singer. It was clear that I should become a musician within theatre.

What else do you play apart from the trumpet?
I play the piano but my main interest is musical direction and conducting. I have my own orchestra, the City Concert Orchestra, that started back in 1994. We play all over the place, and I’ve freelance-conducted for several years.

What’s top of your list in the Grand’s autumn season?
There are loads of things that I’m excited about. I’m a great lover of big bands and the swing era, so I’m really looking forward to seeing The Glenn Miller Story. I’m also a fan of Jersey Boys - in fact, Steven Ashfield, who was in the original cast in London, left my panto in Lichfield to join the cast of the London production. I’m really looking forward to seeing that - and, of course, we’ve got Shrek coming, which is always a good one.

Do you have a personal favourite that you’d like to bring to the stage?
I love old musicals. There are two shows that I particularly adore - The Sound Of Music and Hello Dolly. There are lots of others too, but those two shows are just fabulous. They have every single ingredient I think a musical should have and are very much on my radar. Another show that I’m really excited about is Gypsy. I saw it at the Savoy recently. I was so excited that I phoned the producer straight away and asked him whether they were touring the show because I wanted to open it in Wolverhampton. Apparently a tour is something they’re mulling over at the moment.

Reflecting on your career to date, what’s given you the greatest pleasure?
Making a difference to people is what I get the most enjoyment from. I remember doing a production with music and fireworks at an outdoor Prom concert where there were ten thousand people. Turning around towards the end of the night, with everyone singing Land Of Hope And Glory, all I could see was a sea of Union Jacks and lots of happy faces. That’s always an incredibly uplifting experience.