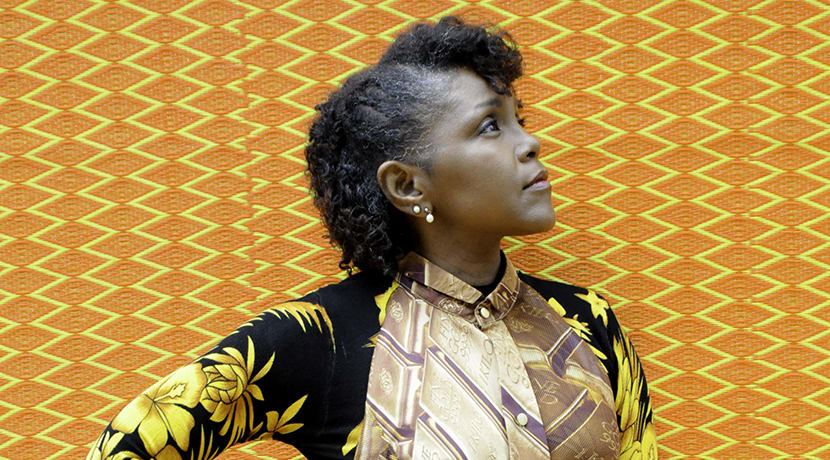 Mercury-nominated soul singer and goddaughter of the legendary James Brown, Carleen Anderson talks political protest, human rights and innovative jazz ahead of her From The Source Festival appearance in Coventry...

This month’s From The Source Festival at Coventry’s Warwick Arts Centre includes a performance by Mercury-nominated soul singer Carleen Anderson. Carleen will appear as part of a sextet fusing soul, jazz and rap. Their gig, A Change Is Gonna Come: Music For Human Rights, explores a selection of political protest songs - from the mid-20th century American civil rights movement right through to the present day.

As an African-American woman born in the 1950s, Carleen’s life experience has been firmly rooted in the fight for racial equality.

“I didn’t find out about my own family’s connections to the civil rights movement until very recent years,” she explains. “Involvement was always kept quiet because it’s still considered quite a dangerous thing to have been a part of, so the family were protecting each other. But even though I only found out relatively recently, being an American and growing up during that time made revolutionary art such an important thing to me. It makes sense that it became part of what inspires me and the work I create as an artist.“

Carleen is a firm believer in the power of music: “Music itself has such an immediate effect. It can calm people, make them jump for joy and sometimes make them cry. If you can add to that lyrics which might mean something to them, then they feel a real connection to the song itself. From there, it can generate an effect on others. That person is also then inspired and passes that inspiration on to someone else. Two people might disagree on everything else possible, but they both might like that one song. There’s evidence throughout time that music has always had that impact - it brings people from entirely different backgrounds together.”

And A Change Is Gonna Come’s set list certainly reflects Carleen’s beliefs: “This was a collaboration between myself, one of the Sound UK directors, Polly Eldridge, and the co-music director, Nikki Yeoh. The focus is on where equality was back then, where we are now, how they’re still similar in some ways, and how we all need to change moving forward. Of course, it would then make sense for the art to change with time too, whether that be a new interpretation of a song or a new version of an old tune, as well as new tunes that have been inspired by those times - all with a 21st century vibe to them because that’s where we are now. The younger generations aren’t interested in singing Kumbaya anymore, and at one time that was the song that brought everyone together.”

The gig also brings in the perspectives of the five musicians performing alongside Carleen.

“Nikki Yeoh, who worked alongside me in creating, will be performing with us too. She’s an award-winning jazz pianist who’s part Chinese. Her son’s father is Afro-Caribbean. So she’s definitely been in those situations herself and with her son, where people will judge you by your culture, background, features and so forth. Nikki is also younger than me -  she’s in her 40s - so her experiences will differ somewhat there too, because times had already progressed in some ways between my date of birth and hers. But in many ways she also relates to my own experience. We’ll be alongside Camilla George, a newly emerged jazz saxophonist who grew up in Nigeria. She’s still in her 20s so will have a new perspective to bring - as will Lady Sanity, who’s the same age. Lady Sanity is a rapper from Birmingham. She’s a very intelligent wordsmith and very astute and aware of the times that we’re in. She sees it from the philosophical consideration of why we’re still in these same situations of inequality.

“We four women will be joined by bassist Renell Shaw, who’s toured with artists like Rudimental and Skepta. Rod Youngs will be our drummer, and he’s played with Gil Scott Heron, among others. There’s definitely a common connection which we all have to human rights in general, beyond the specifics of the civil rights movement. A Change Is Gonna Come is bigger than that. It addresses homelessness and all other sorts of human atrocities which have always been there and which we haven’t quite yet learnt to fix. I feel very privileged to work with these people because they’re all great musicians in their own right, but it’s even better to be getting together for this marvellous cause.”

Not surprisingly in a sextet of predominantly female musicians from ethnic minorities, a narrative of gender equality will run through A Change Is Gonna Come.

“Gender is certainly part of it because some of the songs refer to that too. It’s definitely a given, seeing as the four leads are women. Discussion of gender is definitely implied by the fact that we’ve been given this front platform, but also that we have these strong men in the group who aren’t threatened by women being centre stage. I think that says a lot about how gender unity can happen. It doesn’t have to be the end of the world if the women are up front!”

Also appearing at From The Source Festival is emerging jazz vocalist Judi Jackson, who Carleen worked with just this summer: “I worked with her as part of Soul Women Unite, which was curated by Yolanda Brown. It was a really wonderful line-up, with Judi, Yolanda, Terri Walker, Ayanna Whittaker and myself. Everyone always talks about people already in the industry supporting the up-and-coming artists, but I definitely think it’s a two-way street. Just as the seasoned artist would support the emerging artist, the same would be said for the reverse. That symbiotic relationship is essential for everyone from different generations to learn from each other. That way, we can continue to push culture and the arts forward, rather than feeling like it’s run its course.“

It’s certainly been a busy few months for Carleen, who featured in the BBC Proms back in September.

“The Proms was the most amazing experience. I was the choral director for the BBC singers and this group of top vocalists I’d selected in the UK called the UK Vocalists Assembly. Bringing together these two very different choirs - one from a very formal world, the other from a more contemporary one - to sing Duke Ellington’s Sacred Music - a work of art of strictly spiritual music blending classical, gospel and jazz - was incredible. It was a lot of work too! But they were great singers, and it’s an experience that will stay with me forever. To be in the midst of such amazing musicians and in the Royal Albert Hall was one of the highlights of my career.”

And does Carleen have any other stand-out moments?

“I think one that stands out for me was when I unexpectedly appeared on the stage with my godfather, James Brown, at the Royal Albert Hall in the early 2000s. In my mind, no one went on stage with James Brown!

“Last year was a highlight in terms of my solo career, when my ‘tribal opera’, Cage Street Memorial, was produced by the Barbican. It just shows that there are so many different  aspects to the arts that bring people together.”

So how would Carleen advise somebody who was wishing to make a human-rights statement on a small, everyday scale?

“Even if something you do is very minor, it still builds up. Small acts of courtesy matter because then that spins off into how that person then treats the next person they encounter. We can always do things like making sure you vote and write to those representing you in politics, but so much comes from us as individuals. Politicians take the lead from us. A lot depends on how we treat people -  strangers, our neighbours, people who are different-looking from us, or who go about their daily life in a different manner but aren’t actually hurting anyone. If you can take those little moments to smile at people who are different, then it builds up and politicians will follow the lead of the  people. Indiscriminate gestures of kindness are so important.”

From The Source Festival runs at Warwick Arts Centre, Coventry, from Friday 8 to Sunday 10 November, with A Change Is Gonna Come scheduled for Sunday the 10th.