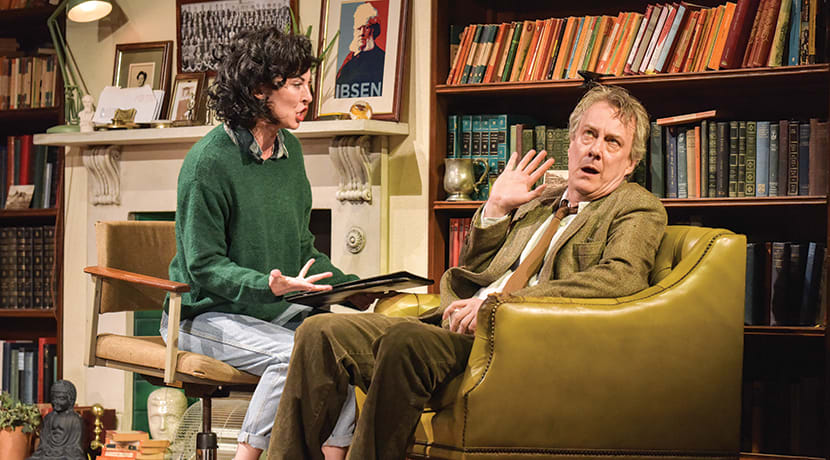 As the Open University marks its half century, Wolverhampton offers a warm welcome to perhaps its most celebrated fictional graduate. Willy Russell’s Educating Rita stars Jessica Johnson as the Rita of the title, a working-class hairdresser who enrols as a part-time English Literature student. Jessica is joined in the play by Stephen Tompkinson as Frank, the disillusioned university professor who’s been assigned to tutor her on her journey towards graduation.

Whilst many people will be familiar with Lewis Gilbert’s 1983 film version of the play, starring Michael Caine and Julie Walters, Stephen Tompkinson’s interest in Russell’s text stretches further back: “I’d read the play and I’d seen it on stage before I saw the film, in the very early ’80s, and thought, ‘One day I’d love to do it’.

“The lovely thing about the stage play over the film is that it’s one set, in his office, and it’s just the two characters. You follow this year of academia, this journey that they both go on together, and find out how these very disparate characters end up offering a lifeline to each other.”

While Stephen had always harboured a wish to play Frank, it was his co-performer who reignited his interest in the role: “I first met Jess nearly two years ago at Live Theatre in Newcastle, when she was performing a play called Goth Weekend. I was rehearsing a Patrick Marber play called The Red Lion. I saw Jess’s performance, and she was absolutely brilliant. She’d done Educating Rita at the Gala Theatre in Durham, said she’d love another opportunity for a longer run, and that I would make a brilliant Frank.”

When the proposal for a revival of the play was put to Willy Russell, he not only gave his blessing to the pairing of Tompkinson and Johnson, he also agreed to help with the production.

“We’ve had Willy present every week of rehearsals, so he’s led us through by the hand very beautifully and very patiently, and hasn’t been at all fussy about the script.

“He knows that audiences have moved on, 40 years after he first wrote it, and that they don’t need as much information as they used to be given, so he’s been quite happy getting the scissors out to his much-loved play. He’s let it be our production, and he’s been delighted with the results, I’m happy to say. We knew that if we were making him happy, then hopefully that would transfer to the audience.”

Since opening in Keswick in April, the play has attracted a wide range of theatregoers: “It’s accessible to everyone. Although it’s set in a university and the world of academia, with someone who’s desperate to enter that world, it doesn’t exclude. It’s inclusive of everybody, and I think that’s always been one of Willy’s great strengths - being able to speak to everyone.

“The producers at Keswick said that the most rewarding thing was that 20 percent of the ticket sales were brand new theatregoers, so that was lovely. We met a guy whose only other experience of the theatre was panto with the kids at Christmas, and he said he was engaged within the first five minutes because he could associate with Rita, being working-class himself. He was absolutely lost in it and thought it was fantastic.”

So how does Stephen view his character’s relationship with Rita?

“Frank’s desperate for her not to become just another student, but instead to try and see things his way. But then, by doing that, he’s almost having too much of an influence on her, when he should be allowing her to think for herself. He’s very aware that he’s doing a sort of Frankenstein number on her and can see the changes in her. He’s not particularly best pleased with what he sees, and his outlet is through drink, sadly.

“Rita tries to rescue him from himself and ends up finding herself, so she’s very grateful to Frank. The decisions that she makes from then on will definitely be hers, and Frank has given her choice.”

Over the years, the broad appeal of Educating Rita has ensured that the story is familiar to many people, but what can the audience expect to take away from this particular production?

“They get to see a great, unrequited love story about second chances and choice, and about the fact that it’s never too late for anyone. Friends who’ve been to see it are dazzled by Willy’s original script. They can’t believe it’s 40 years since it was written, because all the points are still very salient now.”