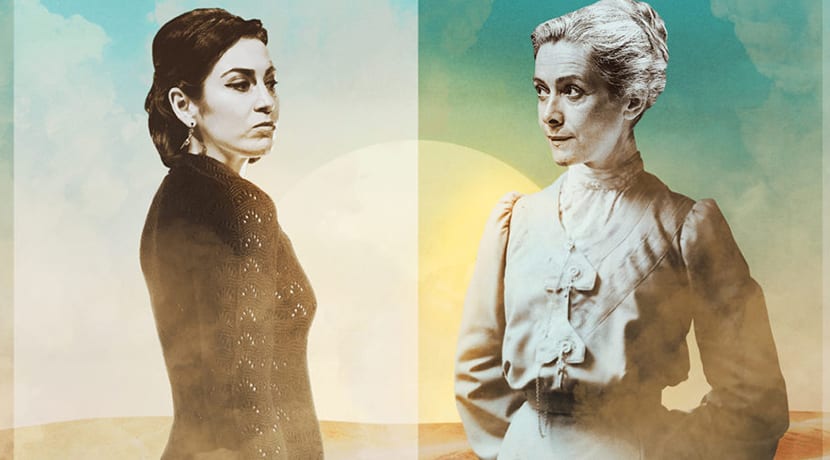 A new RSC co-commission exploring the subjects of nationhood and Arab heritage in Iraq, opens in Stratford-upon-Avon this month. The play’s director, Erica Whyman, explains more...

“The play asks why should we care about artefacts and goddesses carved out of stone when people are dying outside the door...”

Erica Whyman, the Deputy Artistic Director at the Royal Shakespeare Company (RSC), is talking about Hannah Khalil’s brand new play, A Museum In Baghdad, which opens at the Swan Theatre in Stratford-upon-Avon this month.

The play focuses on a real museum which was founded in the Iraqi capital in 1926 by British archeologist Gertrude Bell.

“The play is set in 1926 and 2006 in the museum of Baghdad,” explains Erica, who’s directing the production. “Gertrude had a very serious involvement in the founding of Iraq after the First World War. She dedicated her life to this museum and protecting the  antiquities of this new country Iraq, as she wanted the country to have a real grasp on its own extraordinary past. We designed Iraq under a British lens in 1926, as the decision to place a king on the throne is very quintessentially British for the time...

“In 2006, times in Baghdad are equally as    turbulent, with the allied invasion of the city leaving the museum looted. There are two female archeologists battling about what the future for Iraq and the museum might look like. The challenges in both these times are somewhat similar: there’s violence outside the doors, uncertainty for Iraq’s future, and also an immense amount of hope that this museum can be an emblem of a confident, unified nation upon which a new future for Iraq can be built.”

While Khalil’s play presents the character of Gertrude Bell in a sympathetic light, making clear her good intentions, it also acknowledges that the archeologist’s perspectives were influenced by Britain’s colonial hubris.

“A Museum In Baghdad does honour Gertrude’s contribution to Iraq,” says Erica. “She spoke fluent Arabic, in many different dialects, and Persian, as we might call it today. She was very influential in the shaping of British thinking about Iraq. I think the play paints a balanced picture of Gertrude. While she had a passionate love affair with the Arab world and its people, she was ultimately a product of her time and participated in a   colonial operation to seize control of Baghdad and what we decided was called Iraq. The play questions what were essentially colonial instincts about the need for the British in Iraq. It considers whether the British as a whole actually believed in Arab independence, or whether they were motivated by oil, having a power base between India and Turkey and a profound belief that British civilising forces were good in the world. In our creation of Iraq, we certainly had something in common with the American   idealisation of invasion. These are attitudes that we should find very uncomfortable now.”

A Museum In Baghdad is a co-commission from the RSC and the Royal Lyceum Theatre, Edinburgh: “The spark came from Hannah Khalil, the writer. She had been talking to David Clegg at the Lyceum about wanting to write a play about Gertrude. Hannah is Palestinian and Irish in her heritage, and this is evident in her previous work exploring places of conflict or the Arab world through a European lense. David encouraged Hannah to think about how to get the story of Gertrude Bell into that area that really fascinated her, and also to consider what’s happened in Iraq since 1926. This sparked this inventive play that moves between the two time periods and also puts on stage - in Arabic and English - these rather poetic moments called choruses, where the whole company speak about something that’s older than both these time periods: the deeper history of Iraq.”

A Museum In Baghdad explores how stories told through objects can bring hope...

“It’s only by telling stories that humanity can recover from all the terrible things that have happened, moving forwards with a new way of thinking about themselves and their heritage. Through the objects, we can see ourselves, challenging our own assumptions. For example, I think the idea that things will never get better in the Middle East is something that we need to challenge because it has a long history of being a place of great imagination, progress and freedom. I think with A Museum In Baghdad we’re really trying to open people’s horizons to the deep, wondrous cultural history of the Middle East, such as the discovery of evidence of matriarchies, which goes against all the West’s assumptions. We hope audiences leave with an understanding that the people of Iraq have suffered time and again, for which Britain bears much responsibility. This play is exciting, witty and a really tough truth.”

And how does A Museum In Baghdad resonate with events in the Middle East since 2006?

“At least one of the characters can feel that in the future things are going to get worse. It draws a dark inspiration from events that happened across the region, including the appalling execution of the Head of Antiquities of the ancient city of Palmyra, Khaled El-Asaad, by ISIS in 2015. I think there’s a suggestion in the play that to be the director of the museum in Baghdad is a very risky thing to do, especially as the region is set to become even more divided by sectarian violence. To care about archeological objects is seen as somewhat heretical and not in accordance with an extreme interpretation of Islam. So the play signposts the fact that this is a country and region that is going to face another cycle of terrible violence in the years following 2006.”

Erica is responsible for the Swan Theatre’s upcoming season: “We’re doing Shakespeare’s King John in rep with A Museum In Baghdad, and then later adding in The Whip by Juliet Gilkes Romero, which is about the moment we abolished slavery and bailed out the British slave-owners. I think what all three plays do is ask very searching and emotional questions about power and responsibility. In a way, I think the season is as much about what it is to be British. I didn’t want us to be doing lots of Brexit plays, but I think asking what Britain’s place is in the world, and where our hands are dirtier than we are prepared to admit, is very important at the moment.

“I certainly didn’t grow up understanding that in a relatively recent history - 1926 isn’t long ago in the grand scheme of things - we were still claiming countries for our own and growing our empire. Neither was I taught in school that the first recorded civilisation was in Mesopotamia and China, rather than history starting in Greece and leaping forward to the Roman invasion of England. This play challenges the West’s version of history as Britain tries to work out what its role is in the world. Thinking we have the power to fix things and create nations because we are some great civilising force was a very dangerous attitude. It’s worth thinking about that  aspect of our legacy as we embark on a new chapter of British history.”

A Museum In Baghdad shows at the Swan Theatre, Stratford-upon-Avon, from Friday 11 October to Saturday 25 January.