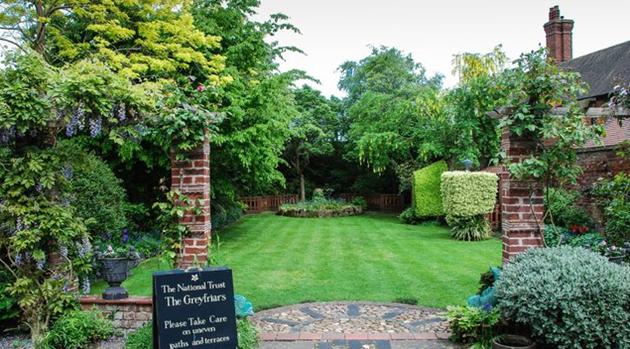 Greyfriars was built in 1480 by a wealthy merchant, it became a home to wealthy families up until the 17th century and in 1699 a baker purchased the lease and divided the house into two.  It became a mixture of homes, shops and businesses for next 200 years. Trade varied and included clothing, hats, bread, leather goods, umbrellas and china riveting.  Over the years buildings were added and extended inlcuding 10 cottages in the back yard.

But as the fortunes locally declined from the 1700s it was threatened with demolition in the 1930s along with the row of 10 houses in Georges Yard behind.  This black and white timber-framed house was rescued from demolition after the Second World War and has been carefully restored and refurbished with a walled garden designed and created by the Matley-Moores recycling and using materials from the demolished cottages.  The Matley-Mooores were two siblings who remained Greyfriars tennants until their deaths in the 1980s. The care of Greyfriars was transferred to the National Trust in 1966.